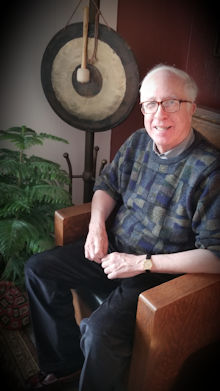 Back in the day, Dr. Paul Finney was fairly certain he was going to run his father’s brick and tile factory. After all, he had just graduated from Stanford with his degree in engineering. “I was fascinated with electrical and mechanical things,” Finney said. “That turned into a fascination of how the human body works.”

Call it the first of Finney’s many lightbulb moments.


Finney first tried acupuncture way back in 1985 when he was a lobbyist in Washington, D.C. Not only was he battling depression, he found himself desperate for solace. Even worse? Prescription meds weren’t working … at all. At the time, acupuncture felt like his last Hail Mary. “I felt so much better after those initial treatments that it became the big event in my life,” said Finney. “That’s when a crazy idea popped in to my head to go study acupuncture. People thought I had lost my mind.”

Even Finney found himself in a bit of an existential crisis – despite the fact that he was determined to help others. If acupuncture could relieve his depression – what else was it capable of? “It was an internal struggle for six weeks,” said Finney. “I finally convinced myself (studying acupuncture) made sense. I wanted to give it a try.” 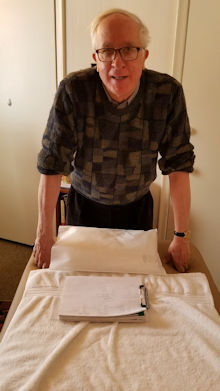 So Finney did what any good student would do. He left the middle of Kansas to study holistic medicine – in the wilds of Sri Lanka, no less. “Before my first week was over, I had treated a 19-year old patient for epilepsy. He had been seeing the same doctor for two years – with little success,” said Finney. “I asked my teachers where to put the needles. He came back the next day for another treatment and after that he never had another seizure. I was blown away. There was a higher force guiding me.”

It was the beginning of a spiritual awakening for Finney – another lightbulb moment.


Finney opened his first acupuncture clinic in Wichita in 1989 … a bold move for a treatment that was still finding acceptance on the coasts, let alone the middle of Tornado Alley. Nearly 30 years later, he’s still seeing some of his original patients. On any given day, Finney treats a bevy of gastrointestinal issues, back pain, anxiety and depression.

“One of my earliest specialties was treating migraine headaches,” said Finney. “Some people quit acupuncture when their physical malady is cured … others continue for the spiritual benefits. Either way it’s nice knowing I’ve helped them.”

Never one to rest on his laurels or on-going fascination with how the human body works, he decided to go back to school. “There’s always more I can learn – so I went to China in 1990 … the birthplace of acupuncture,” said Finney. “And in 1991 I studied Chinese Herbology in Boston with Ted Kaptchuk, who is now Professor of Medicine at Harvard Medical School.”

Finney’s soft tone and gentle demeanor have proven to be valuable assets when dealing with patients new to the treatment. His stories have stories – including receiving a bronze star for his stint in the Vietnam War. He’s found his chattiness helps put new people at ease – especially when eager patients get squeamish when Finney first breaks out his needles. “I find many of my patients to be quite spiritual. They come looking for relief from a problem that has dogged them for years,” said Finney. “If they are fearful, I’ll show them how small my needles are. Some are so thin they can barely be seen. There’s no need to be scared.”

He also holds the distinction of performing acupuncture treatments for well over three decades in Kansas — longer than any other practitioner in the state. And he’s currently one of the only practitioner’s trained in Japanese acupuncture. “In Japanese acupuncture, the needles cool the inflammation in the intestines that causes the illness,” said Finney. “My current passion is curing auto-immune diseases – working to calm the biome of the small intestine.”

When asked, Finney will be the first to tell you that his spiritual evolution has been quite the journey. “I’m way off the beaten path,” said Finney. But he remains inspired by his skills and penchant to help others. The tears of relief he sees from patients are his payoff. “I help a lot of people find a new happiness in their life – especially if they’ve been beaten down by years of adversity.”

Paul Peter Finney has applied botanical, homeopathic and western naturopathic remedies in addition to Chinese herbology for over 30 years.

Finney founded Harvest Health Food in Humboldt, Kansas in 1992 and operated it for over 14 years. His manager and mentor, Jacob George, was the most knowledgeable health food store operator in Kansas, having studied nutrition at Donsbach University and operated his own Health Mart in Topeka for 27 years before joining Finney.

1991-1993       Certificate in Chinese Herbology, Herbal Traditions, Boston, Massachusetts
Studied with Ted Kaptchuk, author; “Chinese Medicine: The Web That Has No Weaver,”
Consultant to the BBC and co-teacher of the course on Alternative Medicine at
Harvard Medical School.

1989-present    Pacific College of Oriental Medicine Annual Symposium, San Diego, California
Attended numerous symposia in which the programs were star-studded with some
of the greatest names in acupuncture.

Practice includes but is not limited to: